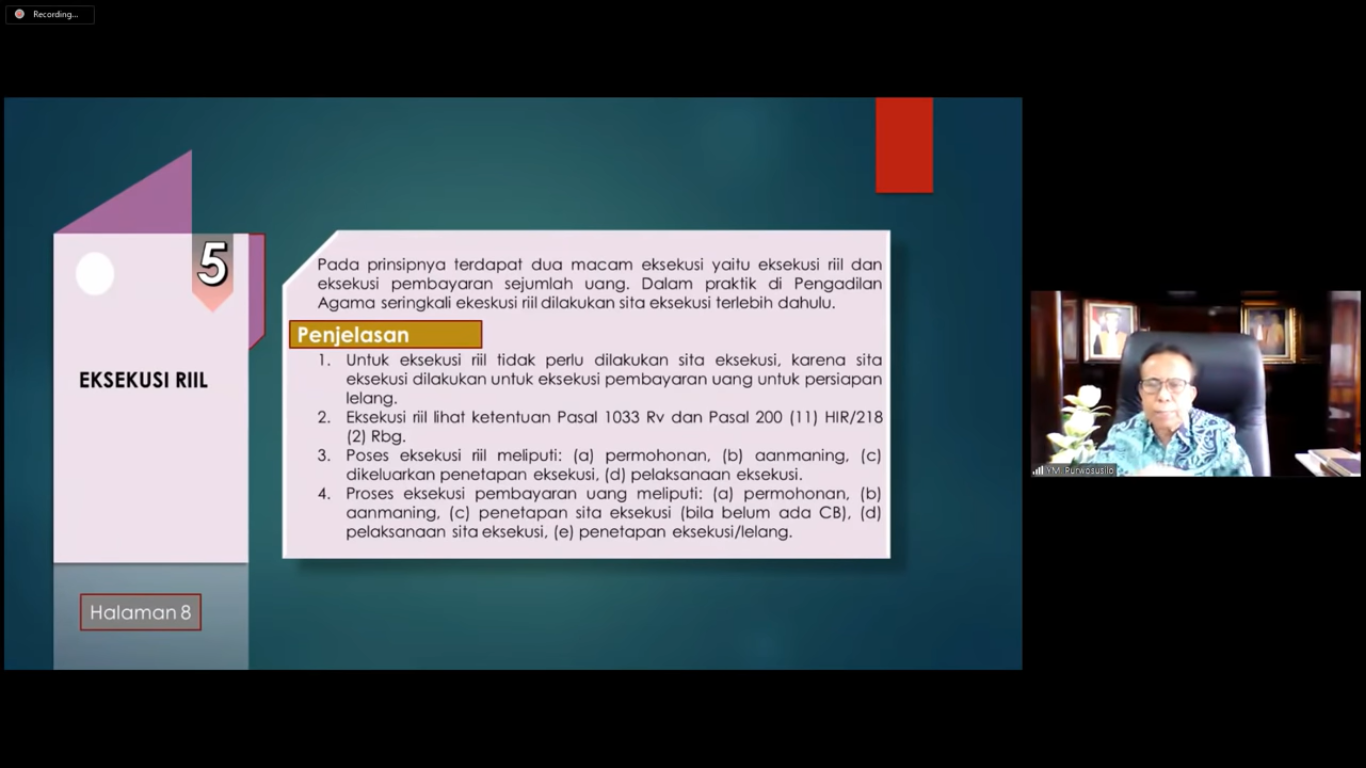 Since April 29th 2020, in order to improve the quality and capacity of judges and all religious court apparatus on judicial technical issues, The Directorate General of Religious Court has been conducting weekly training and studies by presenting the Supreme Court judge from Religious Chamber as a guest speaker.

The study was held online. The first lecture was opened by the Chairperson of Religious Chamber of Supreme Court last month. The second was delivered by The Honourable H. Purwosusilo, S.H., M.H, one of Indonesia Supreme Court Judge from Religious Chamber, by the topic Confiscation and Execution Issues on Friday from 9 to 11 am at local time.

On the first Friday of Ramadhan, exactly at 9 o’clock at local time, the agenda that has been long scheduled finally started. On this opportunity, all the technical apparatus of the religious court were instructed to join the lecture. All the chairs of the high court as well as the chairs of the first instance court with 1A grade which located at the capital of province joined in via ZOOM. Meanwhile, all appellate judges, first instance judges and all the officials of religious courts from all over Indonesia can watch via Badilag Youtube Channel streaming line. Each participant accessed through their own gadget, to conduct the COVID 19 protocol.

The Director-General of Religious Courts, Dr Drs. Aco Nur, S.H., M.H. opened the lecture live broadcast. This activity aimed to gain the capacity and quality of the judges and all the religious court officials performing their duty. The study was designed to be held routinely by presenting the judge from Indonesia Supreme Court. “This lecture will be held routinely and raising the law topic and issue in the religious court. Last week, we had started the study by inviting the chief of the religious chamber of Indonesia Supreme Court, The Honourable Mr Amran Suadi. Today, we have in front of us, The Honourable Mr Purwosusilo as our guest speaker with the topic, Confiscation and Execution. I hope all the religious court apparatus, especially the technical officers can seriously come along the lecture so it will not pass in vain.” said the Director-General of Religious Court before asked Mr Purwosusilo to begin the lecture. 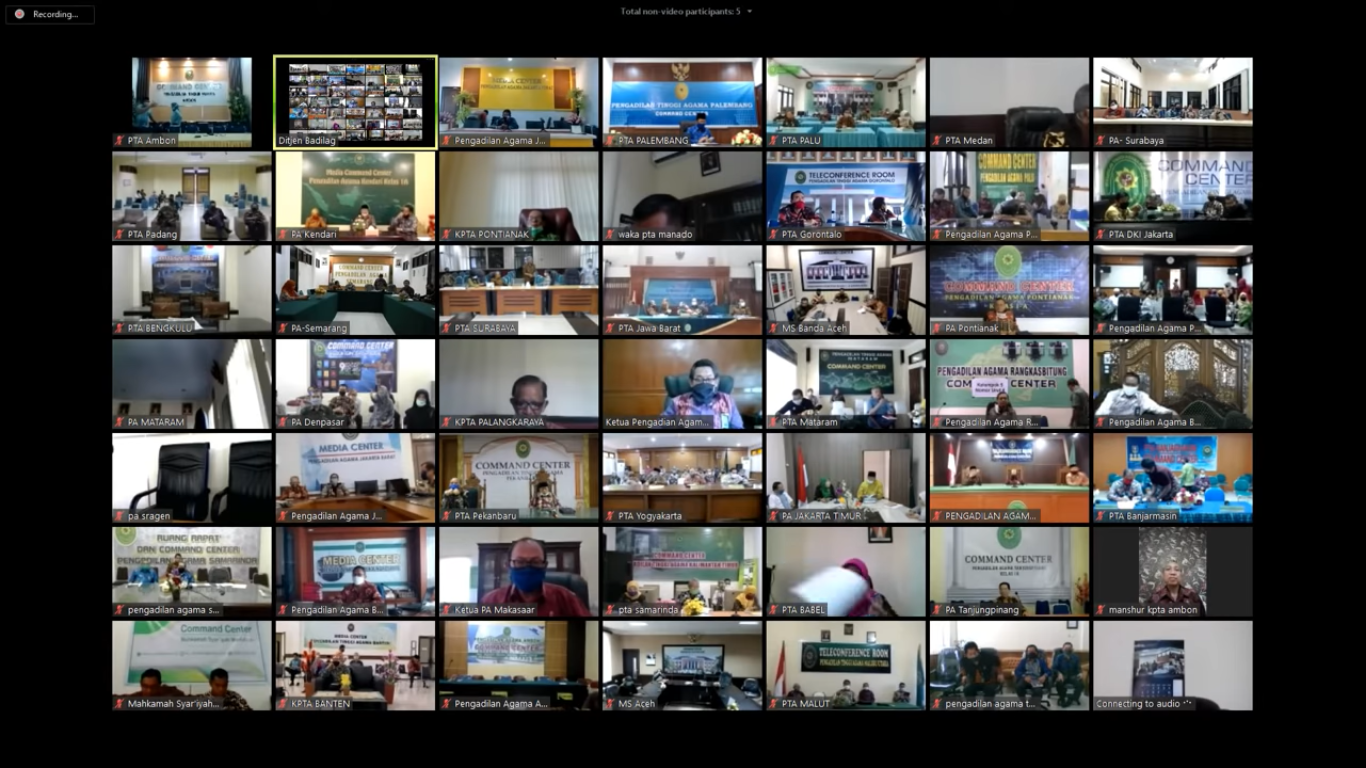 The Problem of Confiscation and Execution

The Hon. Purwosusilo started his explanation with a couple basic issues that may occur in the practice of the religious court. Some of those are confusion between the interlocutory verdict and final verdict, obscure exception consideration, rejected lawsuit without proofing and also recognition with clause. Get into the main topic, He started by revealing some issues in practising confiscation and execution. For instance, a document titled with real execution yet noted as confiscation in the minutes. Another instance, when the resistance of execution is approved, the execution kept continued. The issue may also come up about the restitution of the executed objects.

Further, He talked about an actual problem from one religious court. “There was a piece of land execution in a religious court that was titled as minutes of execution (Berita Acara Eksekusi) yet contained confiscation report. The object was found out still under controlled by the Defendant. Execution should be carried out in accordance with what had stated in the decision content. In the minutes of real execution, it must be stated: “to revoke the object’s right from the Executed and turn it over to the Execution Applicant.” Meanwhile, from the case mentioned, the minutes of execution didn’t state any. Other examples are, to empty (building/ house/ warehouse), to dismantle (building/ house), and any other orders.

“I still have another issue about legacy. The plea was submitted to Court A, but the inheritance is located outside that Court A’s authority (Court B). Court A decided to approve the plea and issued the execution. Since the property is under Court B’s authority, Court A asked Court B to carry out the execution. What happened next was, The Defendant fought back the execution through Court B. The legal action was granted by Court B, yet Court B still continued to execute the property as asked by Court A.” He said.

Back to the case from The Hon. Purwosusilo In that case, the Chairperson of the panel should suspend the execution until the resistance was approved by the Court Chairperson. So, there will be no object gone nor sold by the time of execution. Further, He explained briefly and systematically about his argument.

The Enthusiasm of the Audience

As mentioned before, the lecture was attended online by all chairperson from all religious courts, include the religious court with grade 1A which located at the capital province throughout Zoom and Youtube streaming line. The enthusiasm of all people from religious courts

The Chairperson of PA Cilegon said, “I fully support this kind of activity. The breakthrough from The Director-General of Badilag to have us, supreme judges, from the Supreme Court give lecture and explanation is very necessary and can significantly gain our knowledge.”

The Chairperson from PA Sungai Raya commented, “We were so proud and satisfied joining this lecture, so that we may have broader thinking on how to do confiscation and execution in our district.”

Likewise, two chairperson before, Samsul Bahri from PA Tamiang Layang gave testimony, “Without coming along to Jakarta, we can immediately interact and ask some questions to the supreme judges about concrete problems we may find in our authority. This is so beneficial and efficient.”

This activity was highly expected to gain and improve the quality of all human resource in both material and technical of the judicial system, so the idea of justice supremacy can be felt real. (na/dh/ahb)