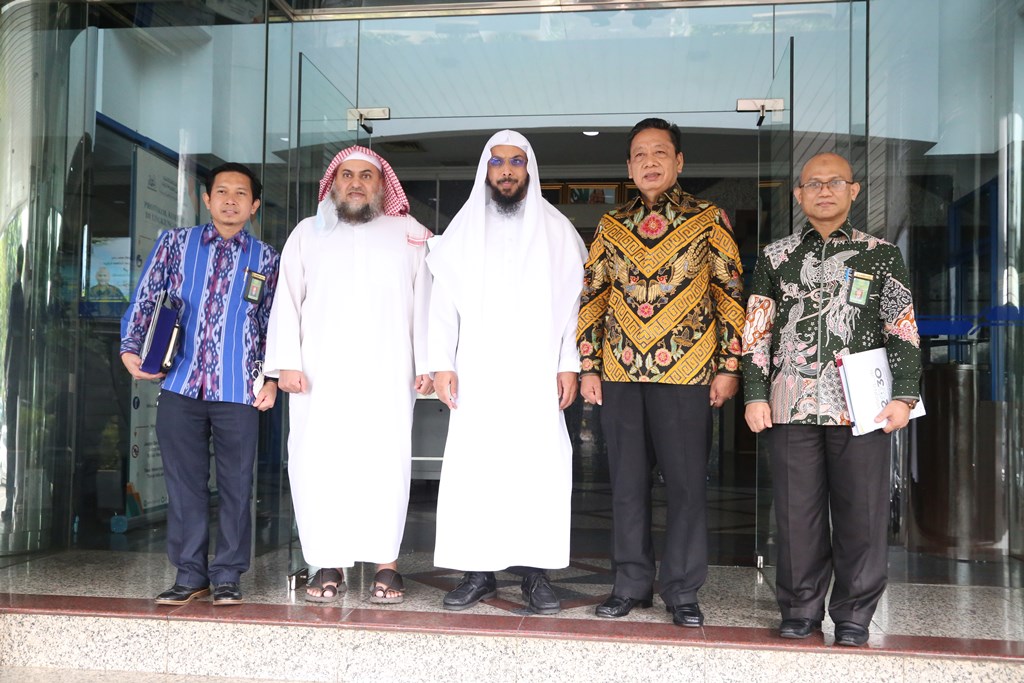 Dr. Omar Hamad Swidan was very happy and gave his appreciation to the Badilag delegation led by the Director General to visit LIPIA with the aim of strengthening cooperation between the judiciary and Saudi Arabian educational institutions in order to improve the human resources of the religious courts in Indonesia.

Aco Nur started his conversation by expressing his gratitude for all the support from the Saudi Arabian government in improving the quality of human resources for judges of religious courts by giving the opportunity to attend training at the Higher Judicial Institute Riyadh.

Currently, there are 5 batches participating in sharia economics education and training at the Riyadh judiciary high school. Each batch consists of 40 participants from Religious Court Judges. This program is held in collaboration between Badilag and Imam Muhammad Ibn Suud University in Saudi Arabia which has been running for quite a long time.

“This time, there are many institutions, both domestic and foreign, that are collaborating with Badilag in order to improve the quality of human resources in order to provide services for justice seekers”, said Aco Nur.

In order to realize a modern world-class religious court and excellent service, reliable human resources are needed in various ways, especially judges must have Arabic and English language skills, like it or not, law enforcers must be able to follow the pace of technological development.

At the end of the visit, Aco Nur invited both parties to cooperate according to their respective needs and committed to exchange experiences, information regarding religious courts in Indonesia, and to close the meeting between Badilag and LIPIA Aco Nur handed over souvenirs as a sign of brotherhood. (aj/ahb) 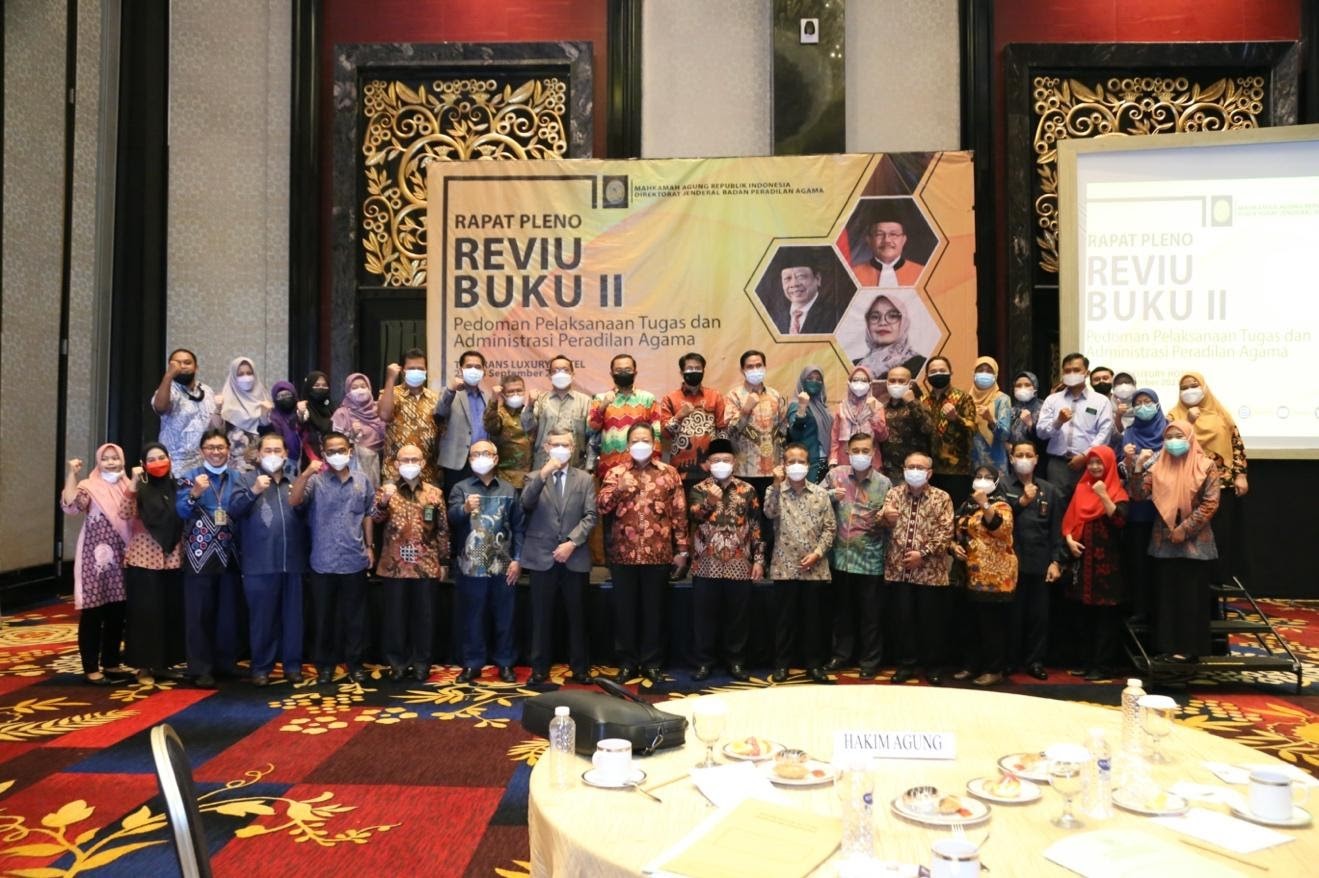 Guidelines for the Implementation of Duties and Administration of Religious Courts, well known as Book II, has so far been used as a reference by judges, non-judge technical personnel, and administrators at the Religious Courts in the management, administration, and trial of cases. Book II is enforced based on Chief Justice Decree Number KMA/032/SK/IV/2006 dated April 4, 2006.

Book II is a guideline for judges and other judicial apparatus in carrying out their duties related to administration and trial of cases. In its development, Book II has undergone several revisions due to changes in provisions and needs in practice. The last amendment to Book II that was implemented was the Revised Edition of 2014. Since then, until 2021, Book II has never been revised, while the regulations regarding administration and trial of cases have undergone significant changes.

The review in 2020 began with the collection of materials for each section in the previous edition of Book II. The Internal team at the Directorate General of Religious Courts identified the need for reform of administrative norms and case trials, which were carried out, among others, by gathering input from Religious Courts throughout Indonesia. The results of the initial work were then reviewed together with the Assistant of Supreme Court Justices which then produced an initial draft which would be reviewed collectively by the Review Team which was later formed by the Director General of the Religious Courts.

The first review of the initial draft of the revised Book II was held at the Mirah Hotel, Bogor, the event was opened directly by the Director General of the Religious Courts, Dr. Drs. H. Aco Nur, S.H., M.H.. In his remarks, the Director General said that Book II which is currently used as a reference in the administration and handling of cases in the Religious Courts does not yet cover the latest regulations related to administration and case handling. 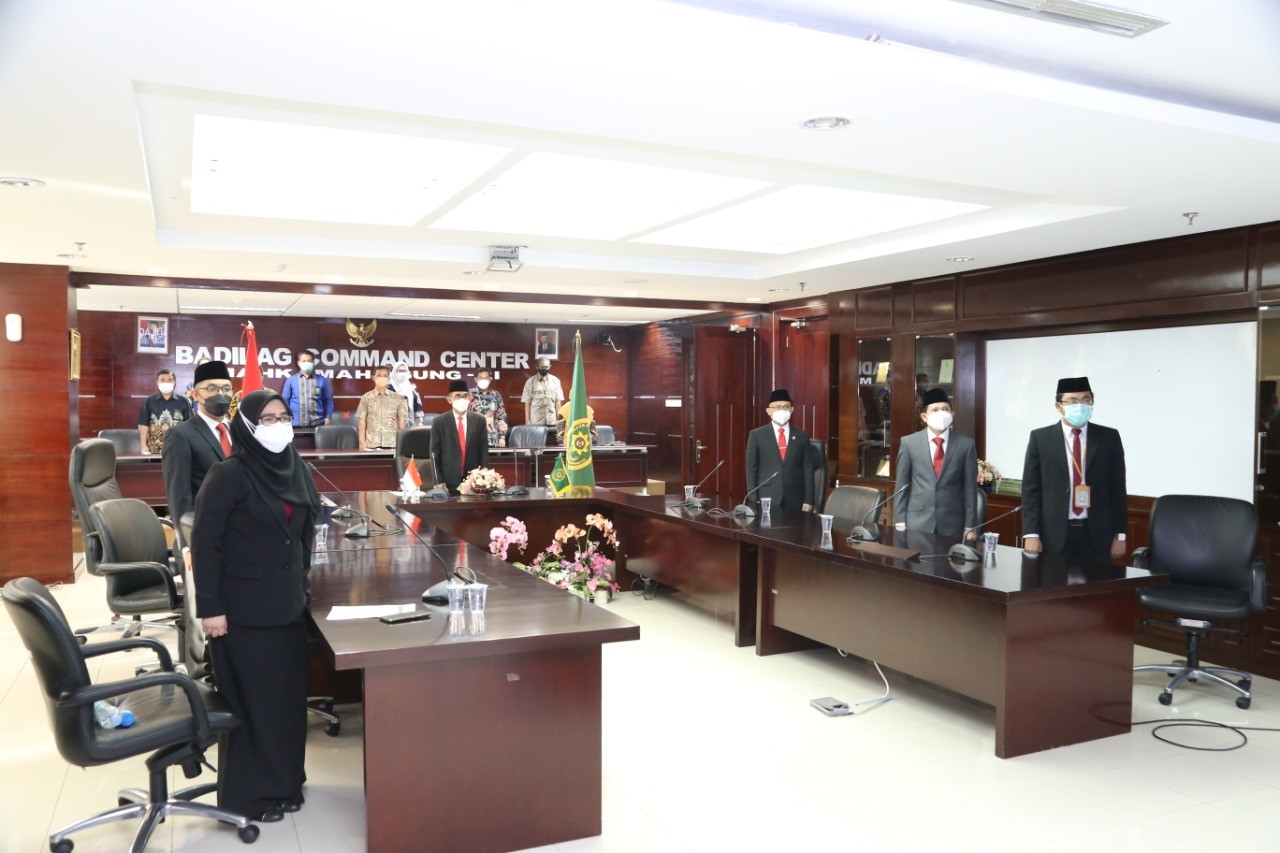 In commemoration of the MA anniversary held several activities. The first activity was a official ceremony led by Chief Justice of the Supreme Court of the Republic of Indonesia, Prof. Dr. H.M. Syarifuddin, S.H., M.H. The semi-virtual ceremony was held in the courtyard of the Supreme Court building, attended by the leaders and structural officials (Ecolon I) of the Supreme Court and by all personals of the four judicial branches throughout Indonesia through the Zoom and Youtube channel.

The theme that was brought up by the Supreme Court on this anniversary was "Strengthening the Independence of the Judiciary through Information Technology-Based Legal Services During Covid-19 Pandemic". In his speech, the Chief Justice of the Supreme Court said that independence is the pulse of justice enforcement, therefore the use of Information Technology should be directed as much as possible for the independence of the judiciary.

On this occasion, the Supreme Court received a special gift on his birthday, namely the screening of a film entitled Meaningful Messages. This film is about a young judge with integrity who struggles with various kinds of trials in carrying out his duties as a judge. The film is adapted from the book D.Y. Witanto entitled Notes Behind the Red Toga. Witanto himself is a judge who currently serves as an assistant to the Chief Justice of the Supreme Court.

This film was made professionally, Dony Alamsyah, an professional actor plays Dimas, a young judge with very good character. Dimas' stubbornness in refusing bribes when his mother was seriously ill and needed money for surgery is at the heart of this simple but captivating plot. This film, directed by Orista Primadewa, in collaboration with the Supreme Court's Legal and Public Relations Bureau and Emtek Digital, is dedicated to all judicial personnel who have dedicated their lives to upholding law and justice. (ahb) 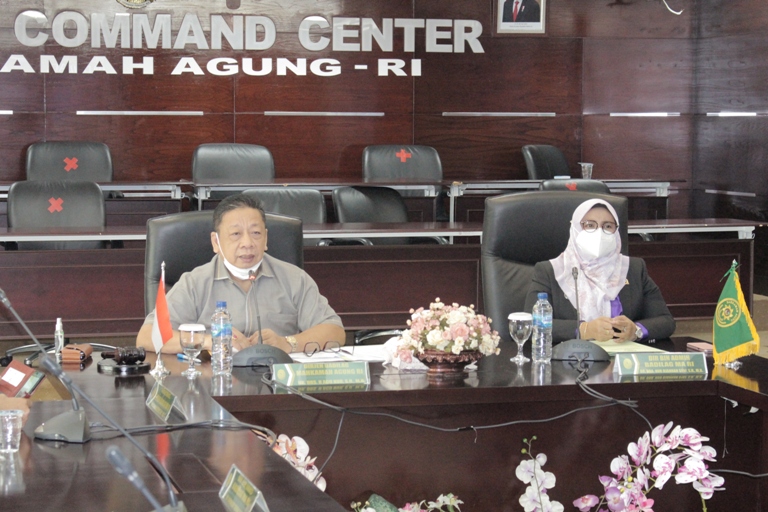 Dr. Aco Nur, S.H., M.H., Directore General of Religious Courts said that the first background that underlies the implementation of this activity is that the current APM Advisors and Assessors are those who were recruited in the 2017 - 2018 period with material focus on management quality that adopts the ISO 9001-2015 standard, while currently there are many other issues that must be taken into account, including the issue of Anti-Bribery management which already has international standards, namely ISO 37001-2016, including demands for Bureaucratic Reform / Integrity Zone, so that understanding and knowledge needs to be adjusted.

The need for a supervisor for the implementation of quality assurance accreditation in each region is very much needed, given the very wide area coverage, besides the promotion and transfer of officials in the religious courts is quite high, so that in some areas there is a shortage of supervisors and assessors and the continuity of the implementation of APM in the satker is still far away.

The aim of this technical guidance is to increase the knowledge and understanding of APM assessors about International Standard Judicial Management, increase the number of APM Assessors, and add Supervisors (Quality Assurance Accreditation Trainer) within the Religious Courts.

Dr. Drs H. Aco Nur, SH, MH officially opened the technical guidance / Training for Quality and International Standard Judicial Administration (Quality Assurance Accreditation) in 2021. In his remarks, the Director General of Badilag expressed his gratitude to the speaker Mr. Ainun Najib, where this activity forms human resources who will become organizational evaluators who evaluate the development and programs of our organization called assessors. 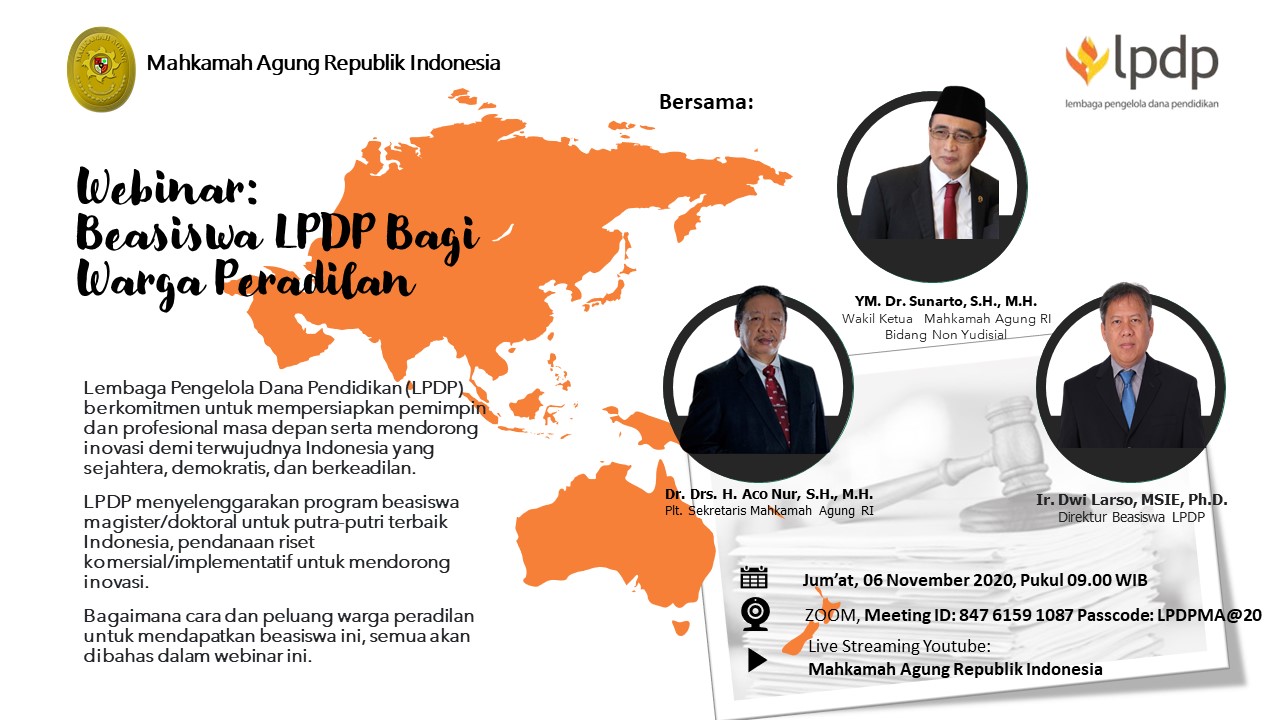 This event is a follow-up to the results of a recent hearing between the LPDP and the Supreme Court, where it was known that the interest and enthusiasm of the judicial apparatus to continue their studies to a higher level, both Masters and Doctoral degrees are quite high every year, however, there are still very few who take advantage of the LPDP scholarships that the government provides each year.

The webinar opens at 09.00 WIB. By the Deputy Chief Justice of the Supreme Court of the Republic of Indonesia for Non-Judicial Matter, The Hon. Dr. H. Sunarto S.H., M.H . In his remarks, he expressed his support for the implementation of this webinar and expressed the importance of the human resource development process in the judicial reform system. "The Indonesian Supreme Court places improving the quality of human resources as part of one of the Supreme Court's missions as stated in the 2010-2035 Judicial Reform Blueprint." He said.

Acting Secretary of the Supreme Court of the Republic of Indonesia, Dr. Drs. H. Aco Nur, S.H., M.H. In the introduction to the discussion, stated that this Webinar aims to provide information and encouragement for judicial apparatus who wish to continue their studies at the best universities, both domestic and abroad, looking for a possible scheme for permanent and sustainable cooperation between the Supreme Court and the LPDP in an educational scholarship program in order to improve the quality of human resources of judicial staff.

Dwi Larso, PhD, Director of the LPDP Scholarship, attended as a speaker, discussing various things about the LPDP. "I am still confused, why since it was first opened since 2012, only about 20 people have registered from the judiciary, and only 2 have received scholarships," he said opening the discussion.

Dwi Larso explained about the history of the LPDP, the types of scholarships offered, the qualifications of applicants that can be accepted, the scope of the scholarships provided, the universities as well as tips and tricks for winning scholarships.

The enthusiasm of the judicial apparatus to participate in this event was so great, there were 910 participants who participated in this event through the Zoom application in a virtual manner, consisting of leaders, high judges, judges and judicial staff from 4 judicial branches throughout Indonesia. Many questions were raised in the discussion and were answered thoroughly by the speaker. (ahb)