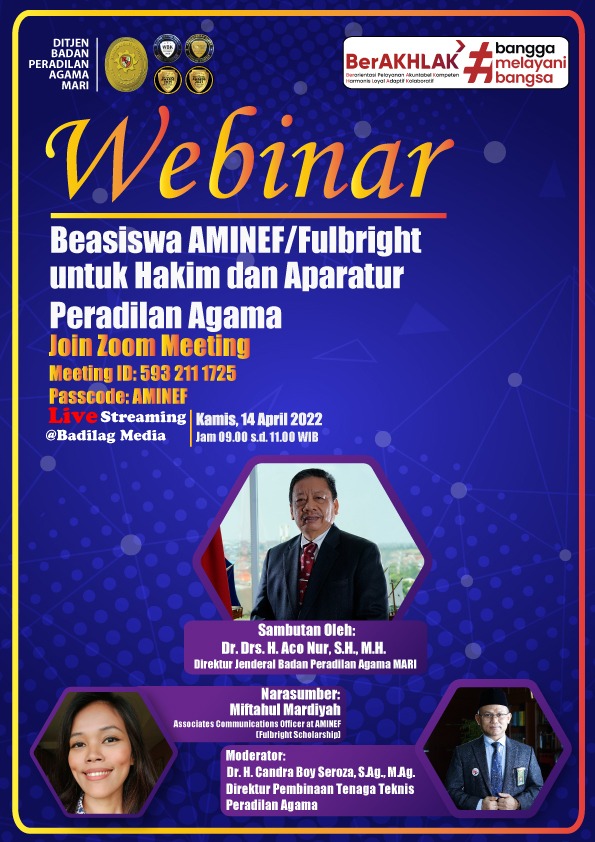 The Supreme Court has determined the strategic steps for Human Resources Management 2020-2024 within the Supreme Court and it’s four jurisdiction of judiciary according to the blueprint for judiciary reform 2010-2035, must be based on competency-based. This is aligned with the demands of bureaucratic reform which obliged human resource administrators to shift the role of administrative personnel to more strategic personnel management.

In accordance with the strategic steps, The Directorate General of Religious Judiciary has held Fulbright scholarship webinar for Religious Court Personnel collaborating with AMINEF (the American-Indonesian Exchange Foundation). The webinar started by the opening remarks from the Director General of Religious Judiciary of the Supreme Court of the Republic of Indonesia Mr. Dr. Drs H. Aco Nur, S.H. M.H., hosted by the Director of technical and administrative personnel development of the religious judiciary Mr. Dr. Chandra Boy Seroza, S.Ag. M.Ag. and the presentation from the Associate Communication Officer of AMINEF Mrs. Miftahul Mardliyah as keynote speaker.

Mr. Director General said in his opening remarks about the human resource development within the religious judiciary “to build the vision of modern and trusted religious judiciary, a professional and qualified personnel are essential. That is why I encouraged judges and religious court personnel to enhance their skills and competencies by participating in this scholarships program”. In addition, Mr. Director then continued by describing the Directorate General of Religious Judiciary as one of the 7 Echelons one of the Supreme Court with 441 work units across Indonesia, 9.377 court personnel consisting of 2.980 judges, 4.050 registry personnel and 2.118 secretariat personnel.

The general requirements for applying the scholarship are:

While hosting the webinar, Mr Chandra Boy Seroza conveyed that as a state of law, religious court is one of essential institution in the foundation of this country, that any changes and/or policies made within the religious judiciary will have great impacts toward the society. Furthermore, the Directorate General of Religious judiciary’s effort to hone its judiciary personnel will determine the shape of religious judiciary in the future, if the state provides opportunities for them to develop themselves in continuing their studies to a higher degree at the best universities in the world. Unquestionably, the investment in education for religious court personnel will pay off back to the state.