This year, the theme is "Acceleration of Modern Judiciary". This theme is a series of relays from the previous themes which expresses the determination, enthusiasm, and optimism of the entire apparatus of the Supreme Court and the judicial bodies under it to be able to move quickly, respond to and adapt to the dynamics of social and technological change that is happening today.

On this occasion, the Chief Justice explained the achievements of the Supreme Court and the judiciary under it to public. "It has become an obligation for the Supreme Court as a public institution, to convey all the performance achievements made during the period of one year, as a form of accountability to the public, as well as an evaluation for efforts to improve to a higher level," said the Chief Justice.

Just like last year, because it was still in a pandemic atmosphere, this event was held in a hybrid manner, online and offline. This event was attended by the President of the Republic of Indonesia, the Vice President of the Republic of Indonesia, Heads of State Institutions, Ministers, Ambassadors, editorial leaders, Chancellors and leaders of Universities, as well as other invitees virtually.

On that occasion, the Chief Justice said that the pandemic disaster had an impact on all areas of human life. However, in the midst of the difficulties we are currently facing, there are many things that we can learn from. "Pessimists see difficulty in every opportunity, while optimists see opportunity in every difficulty," said the Chief Justice, quoting Winston Churchill. This spirit, underlies the Supreme Court's stance in facing challenges during the current pandemic, taking opportunities from a challenge, to make fundamental changes.

Wednesday, January 6, 2022, starting 2022, Directorate General of the Religious Courts hold a 2021 Performance Evaluation and Socialization of the 2022 Priority Program nationally. All leaders of the appellate courts and the first instance in the religious courts were joined online at Badilag Command Center. This event aims to review and evaluate the performance of all work units against the implementation of the work program that has been set by the Directorate General of Badilag in early 2021.

The event was chaired by the Director General of Badilag, Dr. Drs. H. Aco Nur, S.H., M.H., accompanied by all echelon II and echelon III officials of the Directorate General of Religious Courts. The Director General evaluates the performance of all work units related to case settlement based on the Case Tracking System (SIPP), the implementation of the Electronic Court (E Court), the success of mediation, the realization and absorption of the budget as well as the completeness of the court website.

The Director General also expressed his appreciation and gratitude to all religious court apparatuses who have worked very hard so that the religious courts can provide excellent service to the community and continue to move forward towards a great judiciary. He is also grateful for the achievements of the Directorate General of Religious Courts and Relgious High Courts and Relgious Courts in winning the titles of Corruption Free Are (WBK) and Clean Serving Bureaucratic Area (WBBM). This year 25 work units won the WBK predicate and 3 work units won the WBBM predicate. The award was organized by IT Work Indonesia magazine in collaboration with the Indonesian Ministry of Communication and Information, where this event has been running since 2014 until this year. This award is given to government agencies, private companies, companies that have succeeded in implementing digital systems to improve performance, quality and acceleration in implementing government programs for the realization of an advanced Indonesia, in all aspects of the life of the Indonesian people.

The awards given to the winners of digital implementation within their respective agencies have gone through several stages and assessments which were attended by 800 institutions, private sector, and governments throughout Indonesia which were assessed by the jury team consisting of independent and professional IT experts. In the evaluation stage they had criteria, Government agencies have good governance of information technology systems, have problem solving solutions in working with digital implementation, have a positive role to facilitate the running of the organization they lead, infrastructure according to the times and needs and can be developed in the future, have the latest application that can be emulated by other parties, both government and private agencies in order to strengthen the growth of the digital world of the Republic of Indonesia. Monday (20/12), the Ministry of State Apparatus Empowerment and Bureaucratic Reform held an Appreciation and Awarding of Integrity Zones towards a Corruption-Free Region/Clean Bureaucratic Serving Area in 2021. 4,400 work units were proposed in this appreciation and award event. From the results of the evaluation carried out by the National Assessment Team of Ministry of State Apparatus Empowerment, there were 558 work units that managed to get the titles of Corruption Free Area (WBK) and Clean Serving Bureaucratic Area (WBBM). 486 work units won WBK and 72 work units won WBBM.

The Directorate General of Religious Courts (Ditjen Badilag) is one of the Work Units under the Supreme Court that received the 2021 WBBM predicate. This award fulfills the previous year's achievement, the 2020 WBK predicate. The WBBM is a predicate given to work units that meet most of the criteria in implementing six areas of change in the bureaucratic reform program and has been able to prevent KKN and can provide excellent service.

In his remarks, Vice President K.H. Ma'ruf Amin said that this apreciation is given to a strategic service work unit whose leaders and staff have a strong commitment to realizing a bureaucratic work culture that is anti-corruption and serves the public with excellence. "This predicate is not only a form of appreciation but also symbolizes the commitment of your work unit to always be an icon of the bureaucracy that serves clean and free from corruption," he said.

The appreciation of the Integrity Zone Award was handed over directly by the Minister State Apparatus Empowerment and Bureaucratic Reform, Tjahjo Kumolo, to the Director General of Badilag, Dr. Drs. Aco Nur, S.H., M.H. on Monday, December 20, 2021.

Director-General of Badilag Holds a Technical Guidance in North Maluku On the other hand, the Director-General stated that Badilag is committed to changing the paradigm of organizational performance from a manual system to a digital system. For this reason, since 2019, the Directorate General of Badilag has launched 22 applications in order to improve court performance and improve public services. "All Religious Courts throughout Indonesia are asked to implement Badilag policies in order to improve services to the community".

Previously, the Chief Judge of the North Maluku Religious High Court, Drs. H. Subuki, M.H. In his speech, welcomed the Director-General of Badilag MARI and his entourage at Bumi Moloku Kie Raha and thanked the Director-General and the Echelon II Officials of Badilag for their willingness to provide guidance in North Maluku. "Hopefully this event can be useful to improve the performance and services of religious courts to the community", he hoped 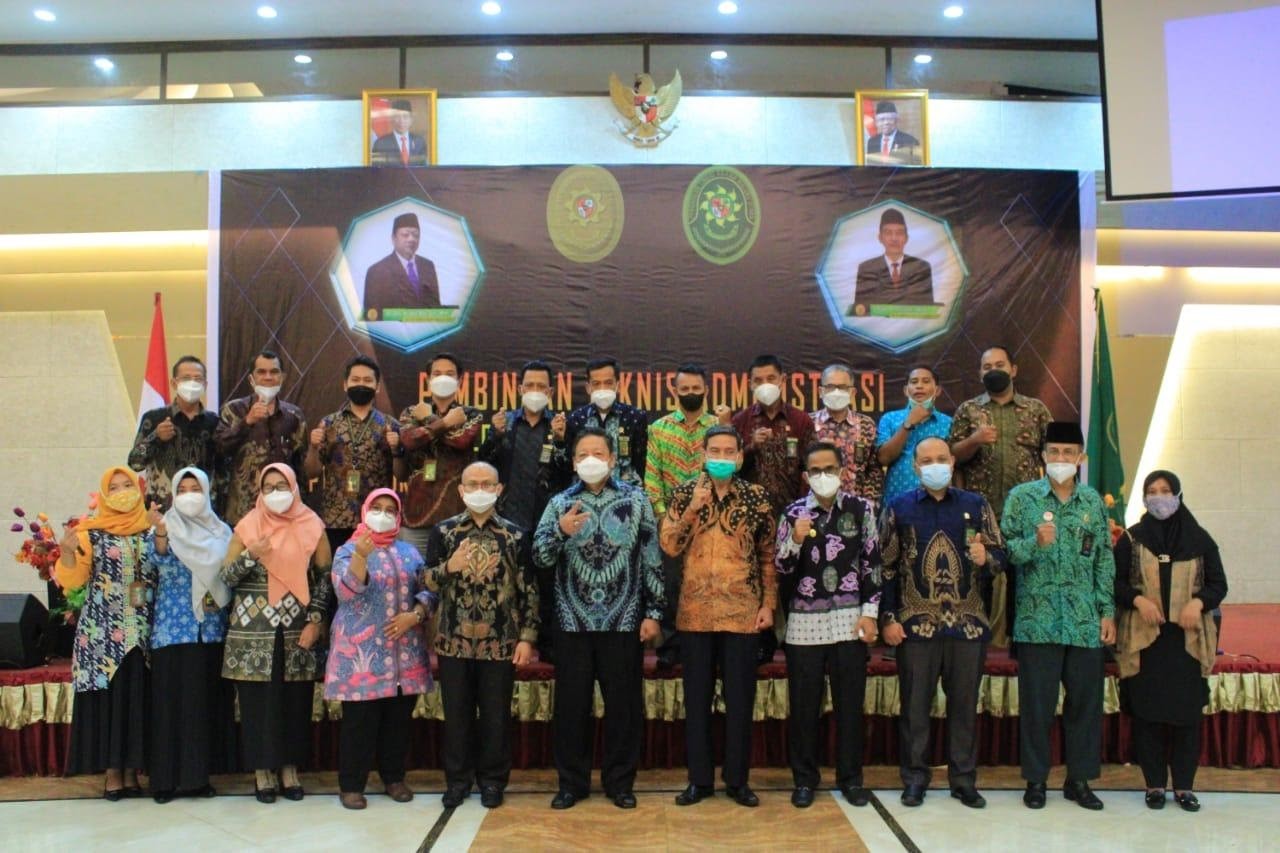 The delegation had the opportunity to visit the Ternate Religious Court, the Soasio Religious Court, and the North Maluku Religious High Court in Sofifi. During each visit, the Director General and his entourage always observe and check the existing public facilities, especially regarding their cleanliness and tidiness to provide comfort for the litigants and provide solutions to the obstacles they face.