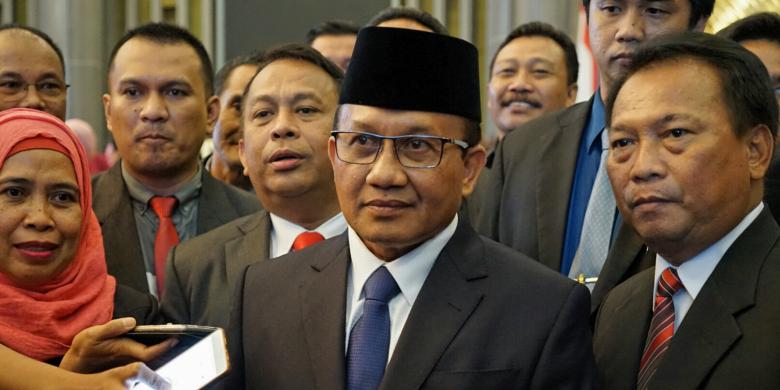 Achmad Setyo Pudjoharsoyo (with glasses), former Chief Judge of West Jakarta District Court, was sworn in as the Secretary on February 2, 2017.

After President Joko Widodo confirmed him as Secretary of the Supreme Court, Achmad Setyo Pudjoharsoyo was sworn in by Chief Justice the Hon. Prof. Dr. H. M. Hatta Ali, S.H., M.H., on Tuesday morning (7/2/2017) at the Supreme Court building.

Achmad Setyo Pudjoharsoyo replaces Nurhadi who resigned in July last year. Pudjoharsoyo was selected after undergoing a number of stages in the process of open recruitment for the secretary post. He was chosen with other two officials, Aco Nur and Imron Rosyadi, to fill in the vacant post. President Joko Widodo finally chose Pudjoharsoyo among the three nominees put forward by the Selection Committee.

As the highest official in the secretariat of the Supreme Court, Pudhoharsoyo leads 6 echelon I working units, 828 regional working units and more than 31.783 court officers all over Indonesia.

A delegation from Indonesia’s Supreme Court visited the Family Court of Australia (FCoA) from 5 to 9 December 2016.

The working visit, funded by AIPJ, was focused on growing initiative within Indonesian courts to create innovations and further develop and disseminate them to other courts across the country.

The FCoA did not merely provide a variety of materials and examples, but also listen and discuss various issues on innovations in Indonesian courts.

Based on planned agenda, the Supreme Court’s delegates have learned strategies and tactics to set up innovative projects ranging from preparation, planning, implementation, monitoring, evaluation and termination.

The Indonesian team also learned communication strategies to stakeholders, ranging from leadership, funders, teammates, public as well as the media. Another crucial matter learned was the challenges to face unexpected changes.

On the final day of the working visit, the delegation presented their plans to create and develop court innovations.

The Supreme Court of The Republic of Indonesia (MA) and  Judicial Council (MP) of Kingdom of Jordan agree to cooperate in the field of court.

It was delivered by Chief Justice the Hon. Dr. H. M. Hatta Ali after a meeting with the Chairman of the Jordan Judicial Council Hisyam At Tal in his office (21/11).

The first time visit of the Indonesian Supreme Court delegation to the Jordan Judicial was aimed to explore the judicial system applied by the kingdom of Jordan and the various achievements that have been achieved and sharing experiences of Jordan court in resolving sharia economy cases.

Further more, through this visit is expected for streghthen cooperative relationship between the Supreme Court (MA) and the Jordanian Judicial Council  and  provide benefits for both parties. And, through this visit can be a starting point for the beginning of intensive cooperation.

Representative from the Embassy of KSA and Indonesia's Supreme Court's leadership briefing the participants.

At the event, the Chief Justice gave some advice and directions to the trainees who consist of 39 religious courts’ judges comprising one high judge, 7 chief judges, 2 vice chief judges, and 29 first-level judges who come from 19 provinces in Indonesia.

The 39 judges will participate in the Islamic economic training for 40 days in Riyadh Saudi Arabia. This activity is fully funded by the Higher Judicial Institute, Al Imam Muhammad Ibn Saud Islamic University in Riyadh, Kingdom of Saudi Arabia.

The Syariah Economy Training was initially held in 2012 and it is now 4th Batch who will travel to the capital city of Arab Saudi. Each of previous batches consists of 40 judges.

Present at the event representative of the Embassy of Saudi Arabia, Sheikh Saad Hasan Al-Namase. While from the Supreme Court, Deputies of Chief Justice, Chairpersons of the Chambers, Director General Badilag, and other leaders of  the Supreme Court were seen attending the ceremony.

Former Director of the Religious Courts Passes Away 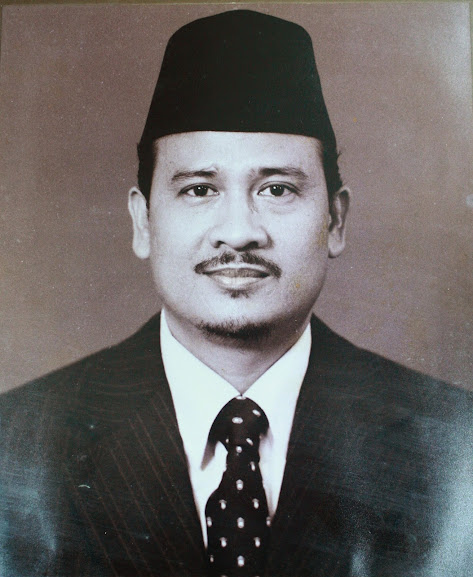 Through badilag.net, the Director General for the Religious Courts, Drs. H. Abdul Manaf, M.H., extended deepest condolences for the loss of one of the religious courts’ great heroes.

H. Muchtar Zarkasy was born on 12 August 1942 in Cilegon Banten. He was known as the mediator of the cooperation between the Department of the Religious Affairs (now the Ministry of the Religious Affairs) and the Supreme Court. The two institutions once had a dispute resulting in a little tension over who had the authority to produce the highest and final decision of the religious courts’ judgments, whether it was the Religious High Court or the Supreme Court. The late successfully harmonized the relationship of the two institutions.

Apart from that, during his tenure, the phenomenal Act for the religious courts was enacted, i.e. the Law No. 7/1989 on the Religious Courts. Following his retirement until his last days, the late was active in a number of social and religious activities, including his current position at the Indonesian Ulama Council as a member of the Law and Legislation Commission.